“We trained residents living nearby on how to operate the pumps and provided wet-weather PPE. In every single rain event over the winter, we had a team on-call to support them.”

The location of Mavrovouni RIC is on a peninsula just North of the old Kara Tepe camp. The area was previously a grassy, open expanse; formerly used for military purposes. Being surrounded by higher ground, the issue of rain water drainage is one that has concerned us from the beginning.

After having witnessed the first rainfall of autumn 2020, we recognised that in one particular corner of the site a torrent of water entered from surrounding roads and industrial areas, as part of the historical storm drain system for the Kara Tepe area. This flooded large numbers of tents and therefore we installed sand and cement bags to channel this storm water around the edge of the site. When the next storm arrived a couple of days later this proved effective and we were able to survey the site during the rains to better understand the natural drainage and how we could modify it to protect as many tents as possible from flooding.

The following week, an extremely heavy storm was forecast, so we collaborated with volunteers from Movement on the Ground, Refugee 4 Refugees and Because We Carry to continue the installation of sand bag bunds in order to guide the storm water away from tents, bagging and placing more than 125 tonnes of sand in 4,800 bags. We worked with a local groundwork contractor to dig drainage ditches and install culverts to take as much rainwater as possible away to sea. Furthermore, we installed a footbridge over the main trench and worked with Swiss Humanitarian Aid (SHA) to design a bridge for vehicles.

A crucial part of our emergency storm response involved digging sump pits, for six dewatering pumps (five of which were kindly donated to us by the German Red Cross) to dispel the rainwater from the worst affected areas every time it rained. We trained residents living in the tents adjacent to the pits on how to operate the pumps and provided them with full wet-weather PPE. In every single rain event over the winter, we had a team on-call, to ensure the pump operators were managing, to refuel the pumps and to operate those on the exterior of the camp.

We continued to install around an additional 280 meters of drainage channels across all areas of the camp, expanding, reinforcing and constantly maintaining the drainage network we previously developed. This network collected water from small trenches dug by residents, and safely conveyed it to designated flood plains, and eventually out to sea. As the remedial drainage groundworks, by government-appointed contractors, progress in Mavrovouni camp, we hope that this kind of emergency storm response will not be required by the first rainfall of the autumn.

The population of Mavrovouni RIC, particularly in flood-prone areas like the Red Zone

Installation of sandbags, trenches and dewatering pumps to prevent flooding 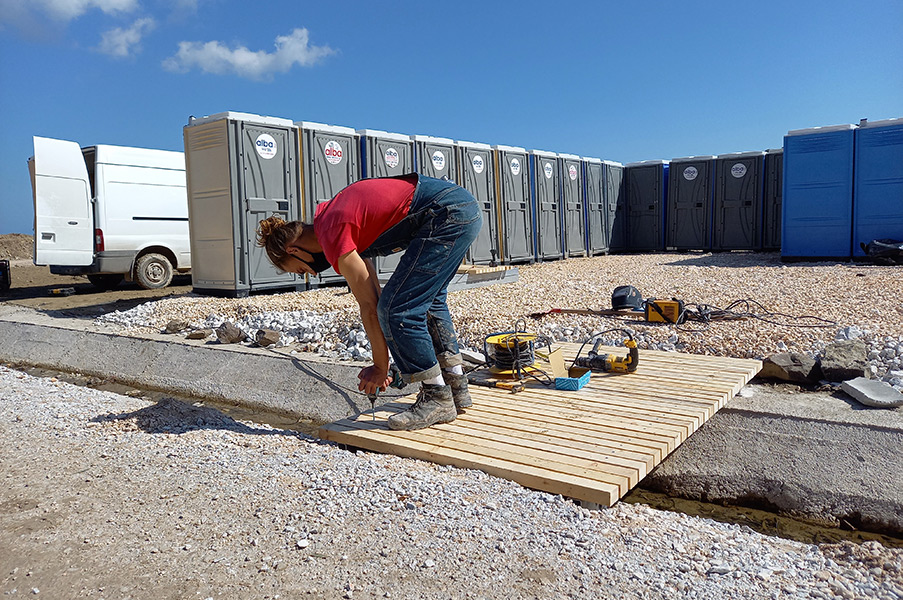